A Weekend of Gaming at Warhammer World

At the end of April 2018 I spent the weekend gaming at Warhammer World. During my time there I played my first games of Age of Sigmar, Shadespire, 8th edition 40k and Warhammer Quest: Silver Tower! What a weekend it was!! 👍😁

This trip acted as a deadline for completion of my Sylvaneth army and, with a matter of days to spare, I successfully completed my final model, Alarielle!

My gaming partner and I focused on AoS first. We kicked things off with a 500 point game on Friday evening. I didn't do very well... and was tabled on turn 3 (or 4 - I can't quite remember!) A combination of having a poor grip on Sylvaneth special rules and picking a poor selection of units contributed to my treefolk getting swiftly chopped down by my friends Ironjawz! Never the less, it was great to finally play AoS. 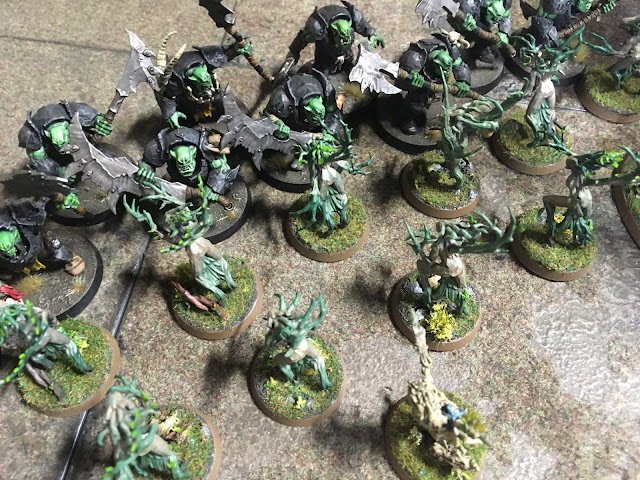 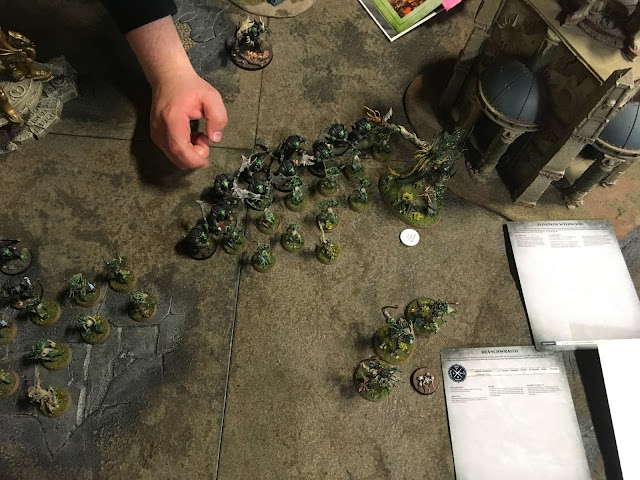 Following the practice AoS game, we relocated to Bugmans for some Shadespire! I rocked out my Sepulchral Guard against my friend's Orcs. Once again, I didn't do very well! Poor preparation on my part led to another spanking! It was still great to finally play Shadespire and I'll use the experience to help rebuild my desk now that I have a game under my belt!

On Saturday we had a 40k feature table, Shrine World Boralis IV, booked. This board, I recently noticed, featured in the April edition of White Dwarf! We managed 2 games, the first being a small 50 power level 'warm up', followed by a larger 150 power level battle. We used the open war cards to determine the deployment, objectives and special rules. As I'd been working on my Sylvaneth since last September, I rolled out my old faithful Light Knights Space Marine chapter to face off against my friends Chaos Space Marines. I had aimed to paint up a Primaris Blood Angels army but apparently, there are only 24 hours in a day...

We didn't finish the first game but my friend took the honours in the subsequent battle. I can't remember the exact objective in play during that battle but I think we had to advance and take 3 objectives placed in the enemy players deployment zone. I played a little too conservatively early on as I kept many of my units in the backfield to deny deepstriking... so essentially ran out of turns to push the small advantage I had in the later turns. It was great to finally play 8th edition and we both found it much more streamlined compared to 7th! I also found (generic) Space Marines to be a little too nebulous in terms of the Stratagems available. I'm very much looking forward to fielding my Blood Angels... whenever I get them painted up... as they feel much more thematic/interesting! 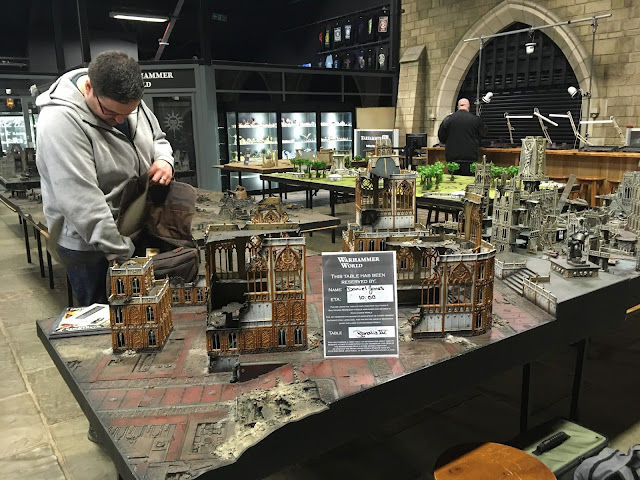 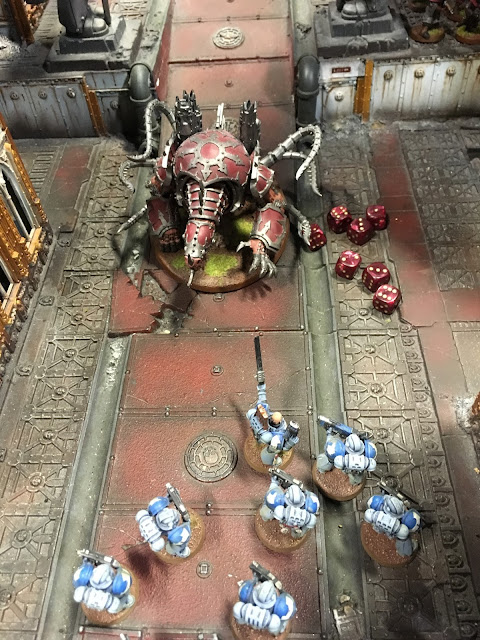 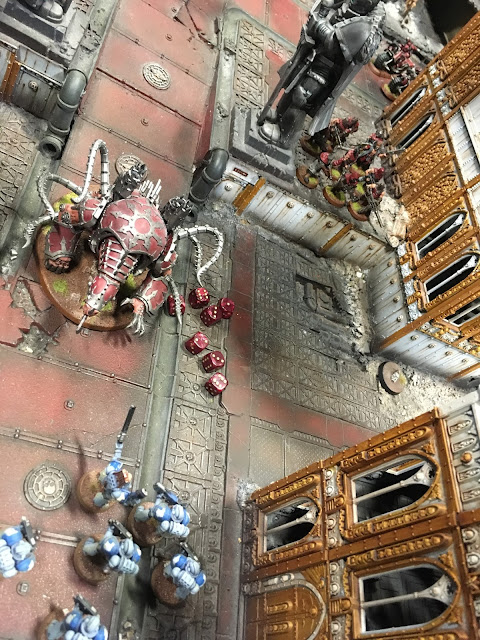 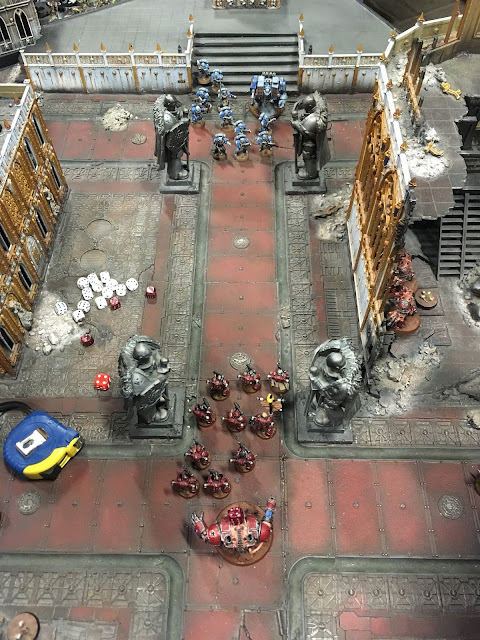 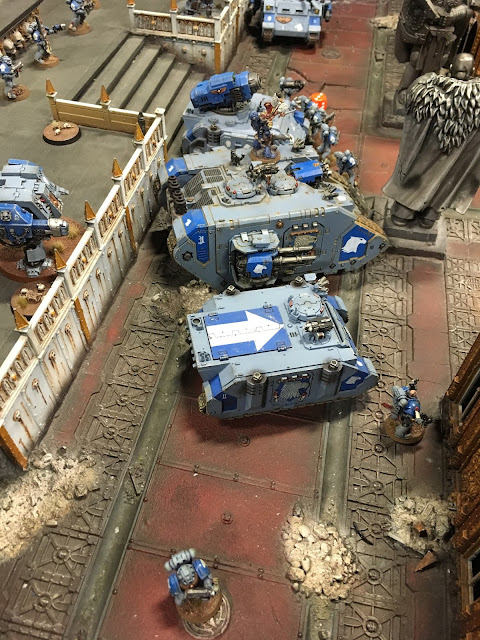 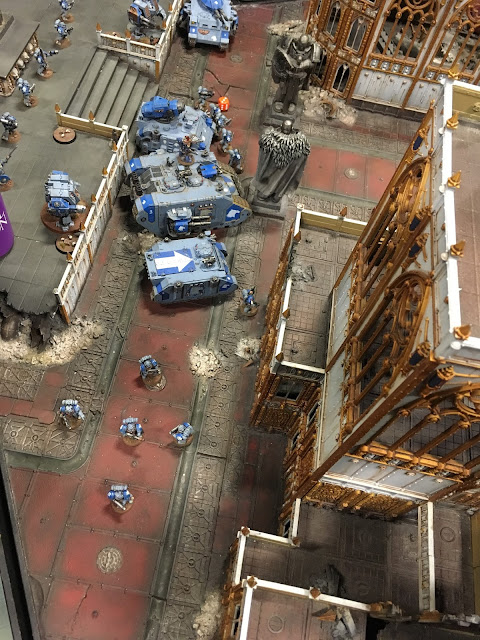 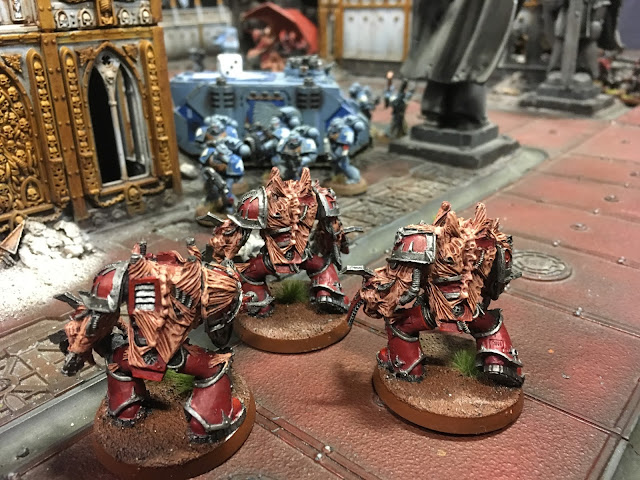 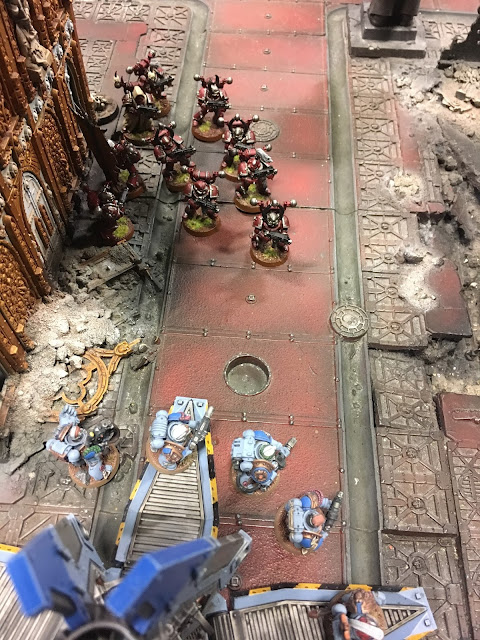 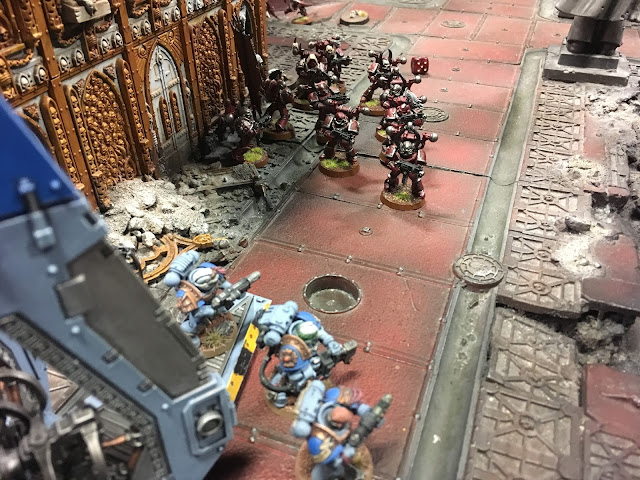 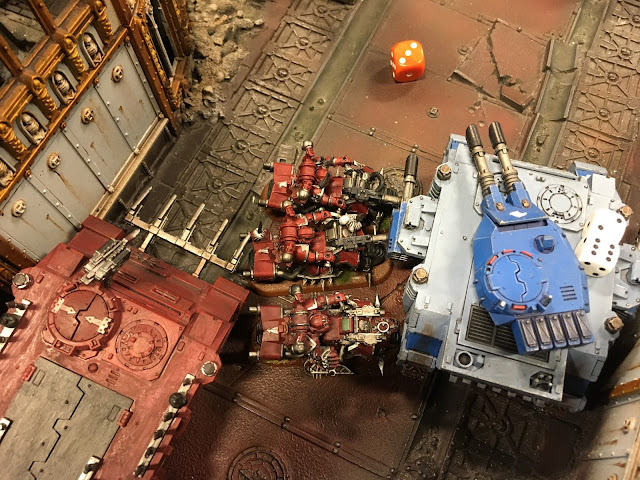 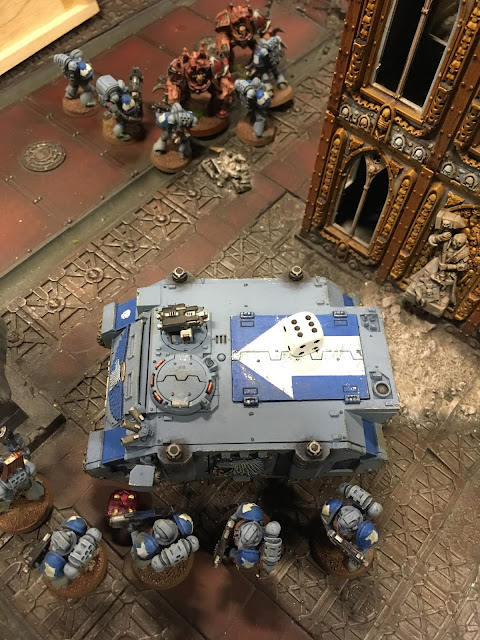 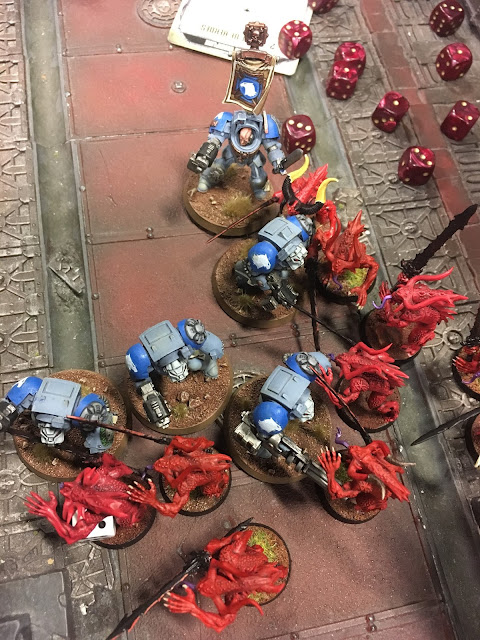 On to Sunday! We had the truly wonderful Ruins of Dras’Shiel AoS table booked. I write 'wonderful'... it is a truly beautiful board, however, for a Sylvaneth army wanting to place Wyldwoods, it's a pain as there's very limited room to put them down!

After the spanking I took in our first AoS practice game, I spent Saturday evening creating a cheat sheet to help me learn the special rules I had access to. This helped immeasurably! We played a battleplan which tasked us with capturing objectives which came down as comet fragments throughout turns 1, 2 and 3. It wasn't looking great for me during the early/middle game but I pulled it back to win in the final turn. I thoroughly enjoyed playing a bigger game of AoS and my Sylvaneth did me proud. Alarielle kicked ass!! I can foresee a few purchases to enhance my army capabilities - another unit of Tree-Revenants and a unit of Scythe wielding Kurnoth Hunters will most likely find their way into my collection at some point later in the year. 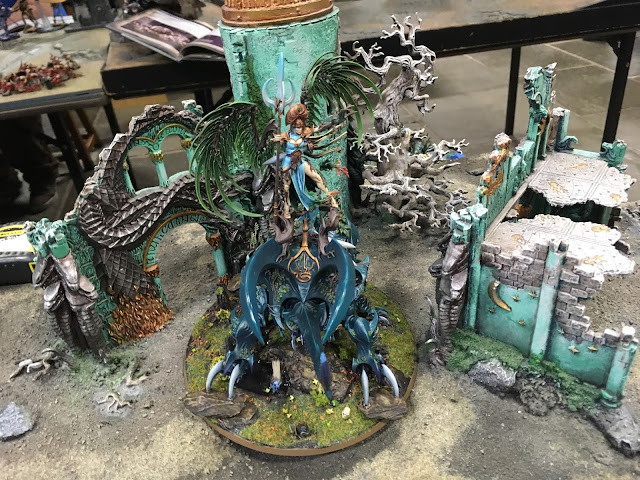 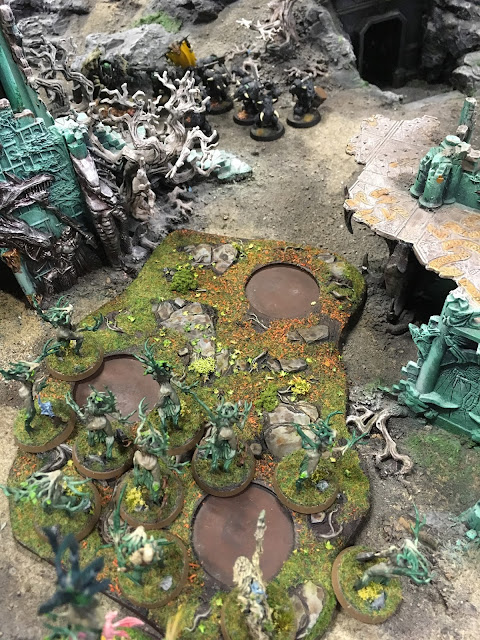 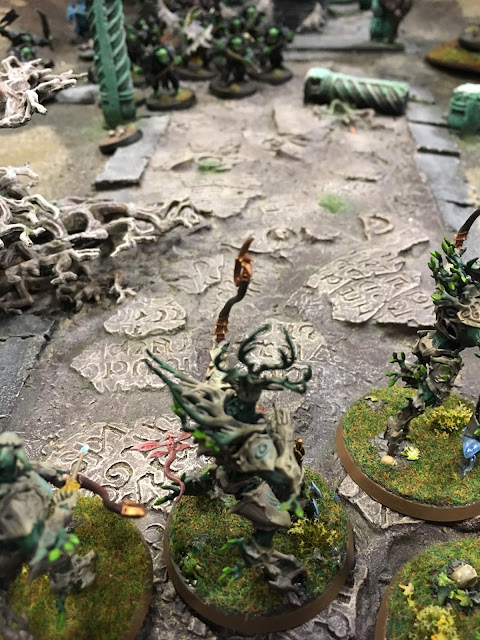 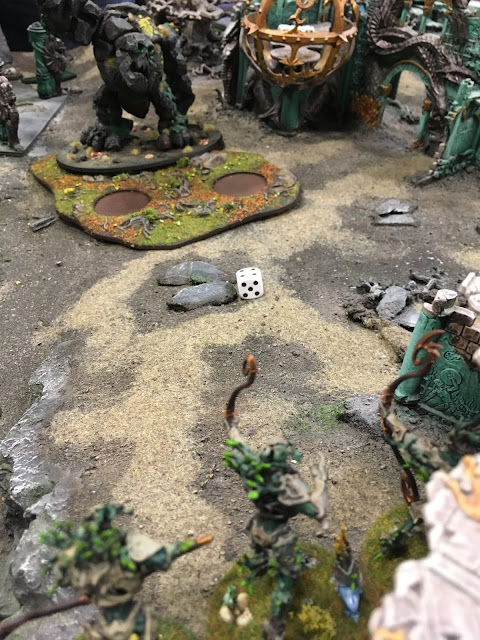 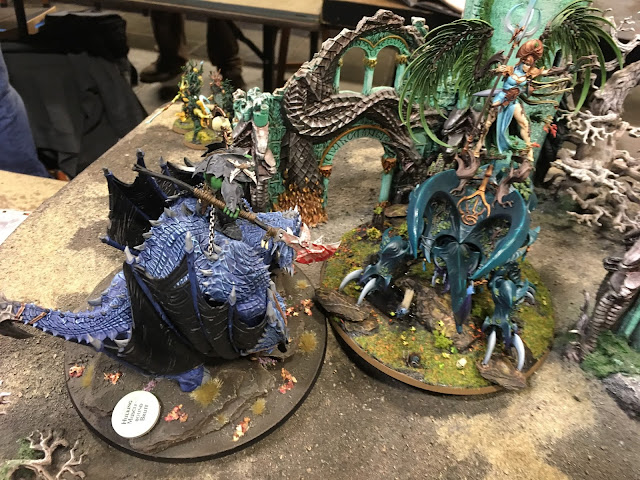 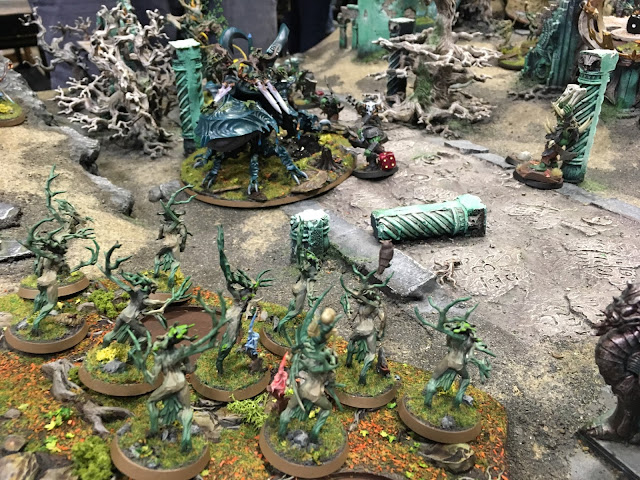 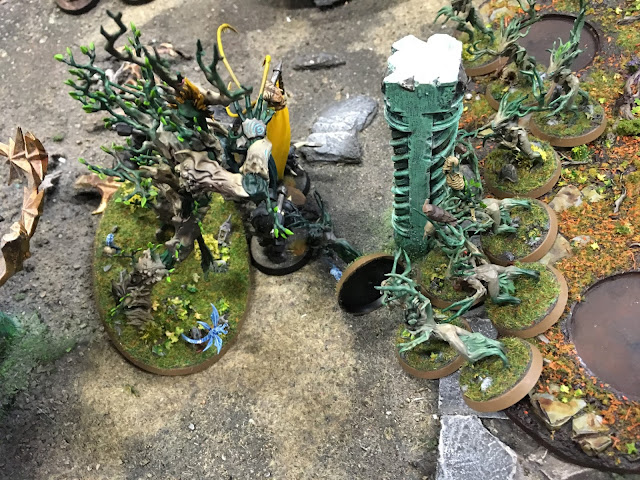 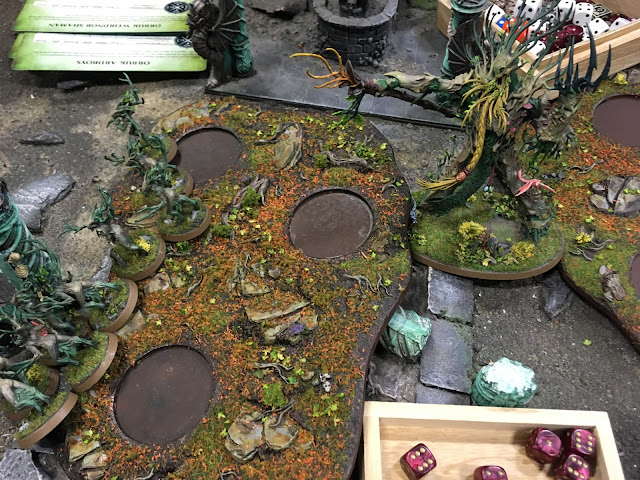 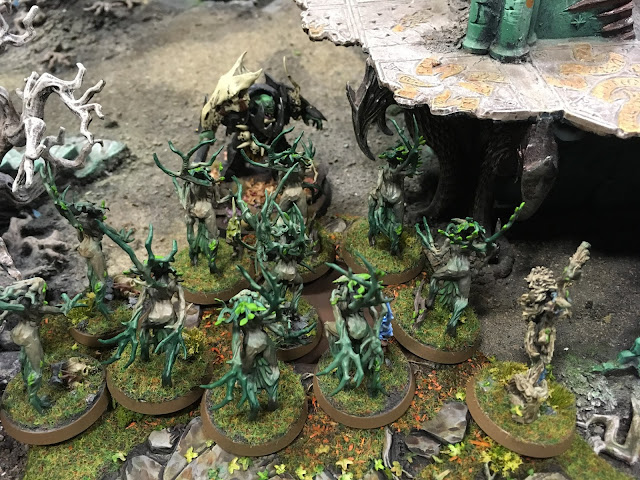 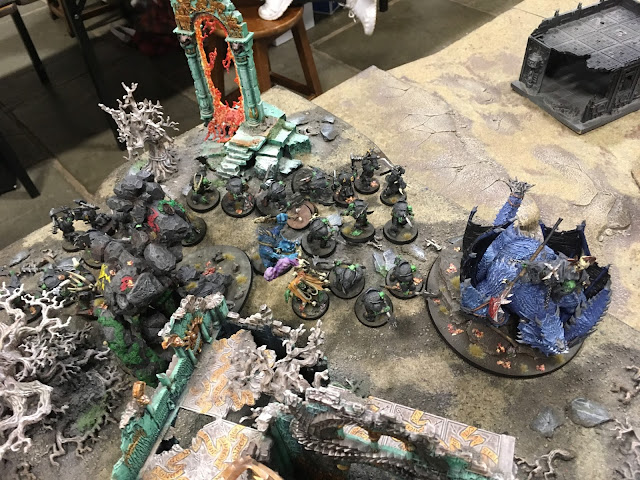 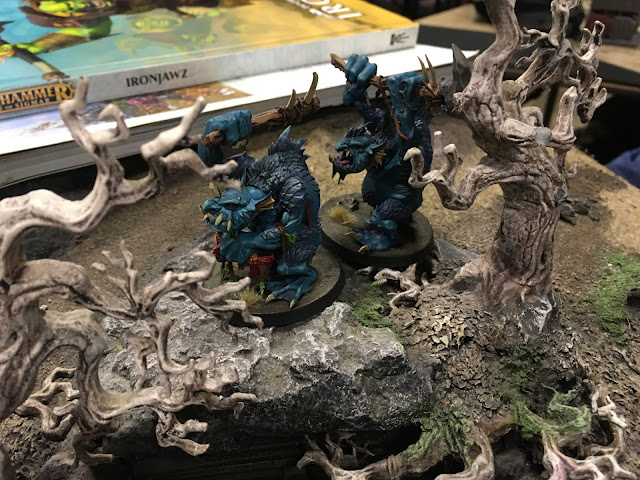 Finally, as the weekend came to a close on Sunday afternoon, we once again descended on Bugmans- this time for lunch and a quick game of Warhammer Quest: Silver Tower. Again, it was great to finally play a game I'd been interested in since launch. We didn't do too well though, getting killed in the 3rd room. It was still great fun and we can't wait to play again with a bigger group later in the year.

With Silver Tower done, we headed home. This was the 3rd or 4th Warhammer World gaming weekend me and my friend have organised. It was another great weekend and provided lots of hobby motivation for my upcoming projects - 1000 points of Nurgle Deamons and a Ghyhran board, both to be ready for Nerd Day in August 2018!!
Email ThisBlogThis!Share to TwitterShare to FacebookShare to Pinterest
Labels: 40k, Age of Sigmar, space marines, Sylvaneth, warhammer world