Sly Marbo: the one man army!

Hot on the heels of BathCon 2017, I've been working on Sly Marbo.

This is an old GW model which I wanted to add to my collection due to his rules as a 'one man army' in Shadow War: Armageddon. I picked him, minus 1 arm and thickly coated in a rather terrible paint job from eBay for about£5! The arm was replaced with one from the Catachan set (again, an eBay purchase). My friend Dan used him (whilst still unpainted) with spectacular results during BathCon 2017.  I will be starting to work on my Sylvaneth and Blood Angels models in preparation for a trip to Warhammer World in April 2018 but I wanted to get this guy painted up before starting those larger projects.

For this model, I used tested out a new process- this involved painting his base coat and highlights before shading. I really enjoyed this process; it was quick and will certainly be the process I now follow for all future models. 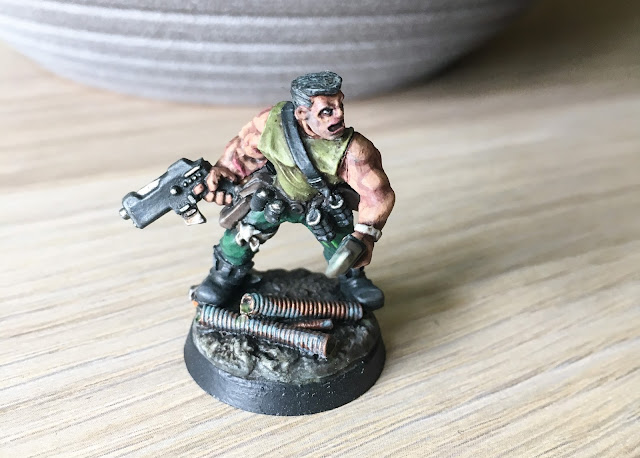 I base coated him with Bugmans Glow for the skin, Death World Forest for his vest, Caliban Green for his trousers and Dryad Bark for the pouches. Alongside those main colours, I painted the base with a mix of Mechanicus Standard Grey/Dryad Bark and Screaming Skull for the copper pipes.

As this guy is a 'one man army' in the context of how I will use him, I wanted to add a more detailed base. The base used here was taken from the Warhammer 40K basing kit which was glued to the top of a 25mm base. 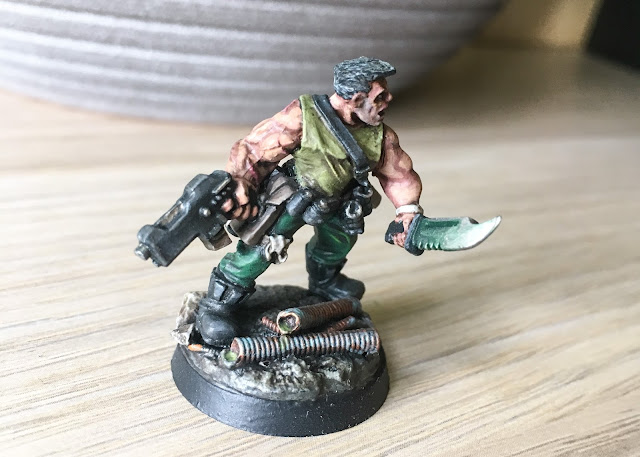 Each colour was then highlighted using the recommended colours from the Citadel Painting System chart. Once complete the whole model was coated in gloss varnish in preparation for the wash. 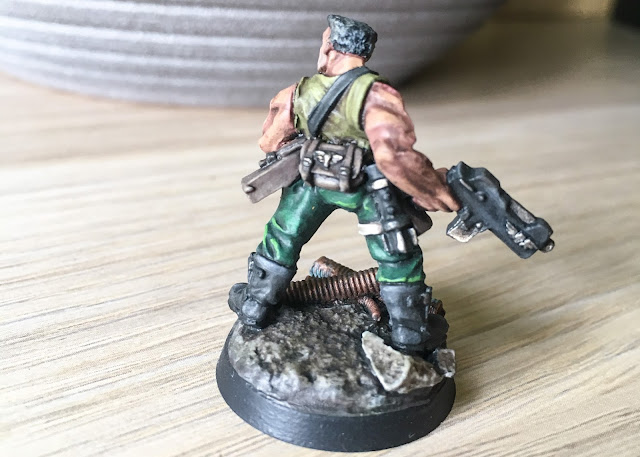 The final steps involved shading the model using a mix of Nuln Oil/Reikland Fleshshade/Lahmain Medium. After that was dry I added Nihilakh Oxide/Nurgle's Rot to the pipes and a wash of Beil-Tan green to the lower half of the knife. Finally, a couple of thin coats of matte varnish were airbrushed on to the model to matte down and protect the miniature.

In conclusion, I am very happy with how he has come out. The new process, combined with the use of more delicate washes (diluted with Lahmain Medium) has allowed me to quickly paint this model to a good standard. As is always the case, I try and take learning forward... onwards to Tree Folk and the Sons of Sanguinius!
Email ThisBlogThis!Share to TwitterShare to FacebookShare to Pinterest
Labels: 40k, BathCon, Imperium, painting, Shadow War Armageddon, Sly Marbo
Newer Post Older Post Home