Throughout 2017, whilst I've been working on scenery for BathCon 2017, I've spent a lot of time experimenting with various painting techniques trying to find methods of painting which fit with my hobby goals, style and ability. In short, the goal has been to find a technique which takes advantage of an airbrush, is quick to apply and which yields good results. I'm pleased to write that I think I've found the right combination of techniques to achieve my goal! This post covers how I've got to this monumental moment :)

So, I've had my airbrush for nearly 4 years. 2017 is the year I finally got to grips with it as a tool. In the past, I always found that the cleaning and maintenance put too much of an overhead on the benefits I reaped from its use. Enter stage left a glass full of water! This very simple addition to my Airbrush regime has made all the difference! Whenever I finish using my airbrush I wash it out in the sink and then simply place it in the cup of water... sometimes for weeks in between use. This ensures that there is never any dried paint to clean out before use and allows for much quicker applications of paint when required.

As a benefit of this, I also cracked the method for preparing paints for use with the Airbrush. You need thin paints! Almost all of my paints are GW. I like the clearly defined painting system they employ in regards to base coats and their matching layer paints. The downside of this is that I need to water down the paints before use in the airbrush. I've found that a suitable mix of paint, water and Vallejo Airbrush Flow Improver make it very easy to dilute the paint enough to work through the  airbrush without any problem.

Now on to the big one! Shading has been the area of the process which has involved most experimentation, failure and therefore required most thought to nail.

Shading is a very important step in painting a miniature and I have been on a mission to find a suitable method of applying a wash which is quick, gives awesome results and most importantly doesn't result in a need to reapply base paints to tidy up the shade. Not only is such an action a waste of time it is also very challenging to adequately reapply base paints when they have been airbrushed and so are likely part of a transition. I realise that applying a targeted ‘pin’ wash would solve this but that option would take too much time so wasn’t an option.

Initially, I attempted to follow the method recommended by the top dawg, Kenny Boucher, of Next Level Painting. Kenny’s recommended method involved coating the model in gloss varnish and then using a gloss Nuln Oil or Agrax Earthshade wash. The combination of the gloss varnish and gloss shade ensure that the surface tension of the wash is maintained and drastically reduced any ‘coffee staining’ which can occur. I initially found this method to give positive results: I used in on a Blood Angels Tactical Squad early on in the year, however, some coffee staining did occur. Later, when using this method I encountered some issues when the wash seemingly dissolved the gloss varnish coat. This had some very problematic results for the Shadow War: Armageddon terrain I posted about back in June. It's worth noting though that I don’t think this was due to the wash/technique… more I’d either applied the gloss varnish to thinly or that I hadn’t left it long enough to dry (or both!).

As I appear to be covering this in chronological order, next up, during the summer I was listening to an episode of the fantastic Sons of Heresy podcast and the hosts mentioned following a shading technique they learnt during a seminar at a Horus Heresy event. After a quick YouTube search, a video of a chap called Mark Bedford who works at ForgeWorld revealed not only the secrets of how to apply a great wash but also how to follow a quick painting process to get your models on the board. I’ve included it below as it’s a fantastic video and well worth a watch, but the section which stood out for me revolved around his wash mixture… and how he applies the wash as the last stage of painting a miniature.

Andy’s wash mixture stood out as it seemed to promise the answer to the coffee staining problem. Essentially one mixes 1 part Nuln Oil, 1 part Seraphin Sepia, 1 part Lahmain Medium and 3 parts water to produce a subtle wash mixture; applied after a coat of gloss varnish. I tried this mix on 3 of the GW Objective Markers which were released along with 8th Edition. The washes worked fantastically aside from white residue which appeared in the areas where the wash had pooled the most. Upon investigation, it appears that this is due to the water element of the wash. Diluting GW washes with water is a huge no-no!

Following on from unlocking the ultimate shade formula I'd like to cover the idea of base coating, then highlighting and finally shading. This is, of course, different from the GW painting system of Base - Shade - Highlight! I feel that if one chooses to use an airbrush as the primary method to apply base coats and use gradual transitions for highlight (and also some shadows), following the traditional process causes issues as maintaining the transitions is difficult. Alternatively, if one can apply the highlight before shading the model... and the shade doesn't cause any coffee staining, that's ideal!

The trick is to highlight the model to '11' in preparation for the colour muting down. Whilst painting many of the large GW bits of scenery I've worked on, namely the Sector Mechanicum (Shadow War: Armageddon terrain), I noticed how the final colour of the terrain was always coming out darker than I desired. There were two reasons for this, 1) that the airbrush layers became less vibrant when dry and 2) as already indicated, the wash when applied also reduced the vibrancy of the colour. On some of the later pieces of scenery, I got used to highlighting the model to '11' in preparation for the toning back of the colours and found that it works perfectly! The bonus is that applying the shade last means your models look suitably muted and 'realistic' (as opposed to a cartoony look).

Pulling it all together

When painting my most recent model, Sly Marbo, I took the opportunity to bring together all the lessons learnt (mentioned above!). The shade was mixed up using 1 part Nuln Oil, 1 part Seraphin Sepia and 4 parts Lahmain Medium (essentially replacing the water element from Andy Bedford's mix with an increased amount of Lahmain Medium. Happily, it worked a treat and in conjunction with all my learning, he looks great! 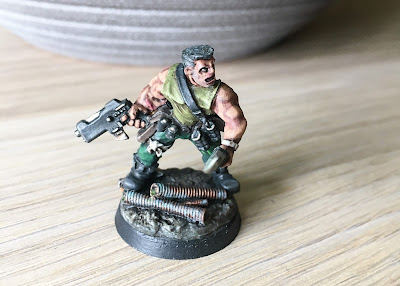 In conclusion, I feel like my understanding of painting has increased a lot this year. My abilities with a paint brush (or airbrush) may not be top drawer but what skill I do have, combined with the techniques I’ve mentioned in this post, should mean I’m able to increase my output and for the models to be of a higher quality than I was previously achieving.

The learning never stops though... Next up I will be focusing on my Sylvaneth force. These models will provide a fantastic opportunity to refine the process on some amazing, organic miniatures. I’ve also ordered some Army Painter shades and shade medium as I’ve heard great things about their shades. I will use these to mix a wash along the lines as that mentioned above.