This model below was washed with Humbrol Dark Brown wash and then, after 20 minutes, I applied White Spirit in order to diffuse the wash and clean up the armour plates. This is my (overall) favourite model of this batch. 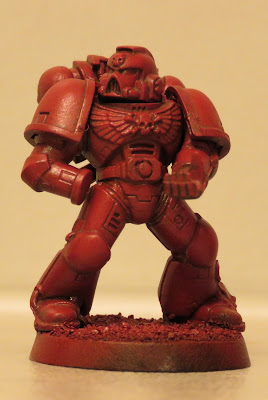 On this model I experimented with a technique used to re-create worn armour (so you can see the metal underneath). This is achieved by painting the model LeadBelcher, followed by a coat of Gloss Varnish, this is then covered by a couple of layers of Hairspray (to seal the model). After this I then base coat the model in Mephiston Red. Once the basecoat has dried I apply some water to the area I want to distress and then use a sculpting tool to remove the red layer of paint. Basically, the hairspray dissolves when the water is applied and so the paint can easily be removed, leaving the bare metal underneath. I had used this technique on my Space Marine Land Raider but wanted to see whether the effect translated to a smaller scale. The result looks 'OK' but considering how little paint I would want to remove (i don't want the marines to look too shabby!), I'm not sure of the value of using this method on every marine. Further to this, this model was washed with a home mixed black oil wash. 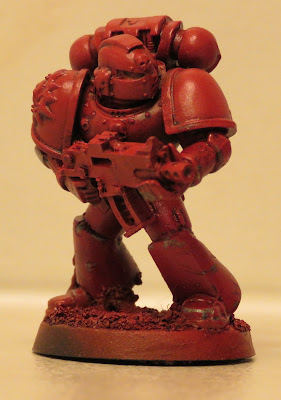 This marine was washed with a very diluted brown oil wash. the shade is extremely subtle on this marine I had fully expected this outcome once I over diluted the wash! 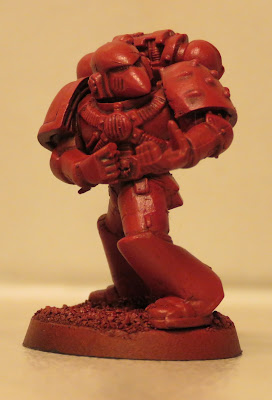 I still want to experiment a little bit more with pre-shading (spraying Grey on to the black primer before applying the Mephiston Red) and some subtle zenithal highlighting of the armour. I should be able to spend some time on this in the next week or so and will post the results then.
Email ThisBlogThis!Share to TwitterShare to FacebookShare to Pinterest
Labels: 40k, Blood Angels, modelling, painting, Test Model
Newer Post Older Post Home